How long have you lived with Irish Wolfhounds?
An Irish wolfhound was my childhood desire. Living with this gentle giant became my dream after I have read A. J. Dowson´s book Finn the Wolfhound. The dream came true when I finished university and my husband and I lived in the company of Irish wolfhounds since 1997. Our first Irish wolfhound was Fred Flinstone Norman, son of Quincy of Kilmara and Connie Norman. This magnificent and very successful dog with a gentle and friendly temperament also inspired our kennel name - Flintstone.

Why did you decide to become a judge and what do you enjoy the most when judging?
I considered becaming a judge for a long time. I was supported by my friends and especially by my husband. During the process I enjoyed studying, attending the judge´s seminars and acquiring new knowledge. Before each judging appointment I am a little stressed, very excited and I am always looking forward it. I enjoy the posibility to concentrate only on the dogs and the privilege to spend time with them.

When was your first judging appointment?
My very first judging experience was a club breeding evaluation in 2016, where the Czech wolfhound club issued breeding licences. The first show I have judged was a national dog show in Brno in 2017.

What was the biggest/most important show you have judged?
I was honoured to judge an Irish wolfhound club show in Belgium in November 2018 with the entry of 75 dogs.

Was there a dog among those you have judged who gave you goosebumps?
At the International dog show in Prague my BOB was a truely beautiful, soundly constructed bitch with a good reach – Annie Mes Amis de Mafinns, who went to win the Group as well. I was very excited about my winners at the Belgian club show, where I gave the titles to Phoenix from Graham´s Ark (BIS) and Gaeltarra Eireann Raff (BOS).

Which of your own dogs do you consider the best? Would you share a picture with us?
Each of my dogs was or is special in some way. I had an amazing coursing dog, great therapy dog as well as show champions. I am going to name my Ch. Four Roses Flintstone, who has won many show titles, the most prestigious was a Supreme BIS at Central European Sighthound Specialty in 2017, which was awarded to her by renowned judges from USA, Canada and Sweden. I am very happy to have her son and granddaughter at home as well. 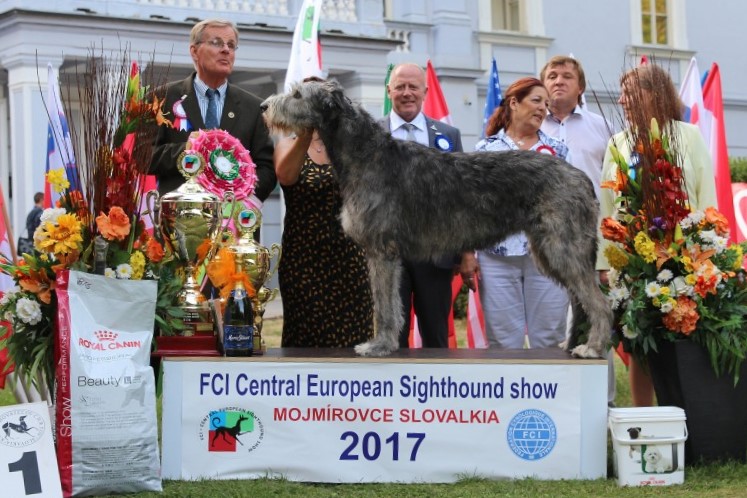 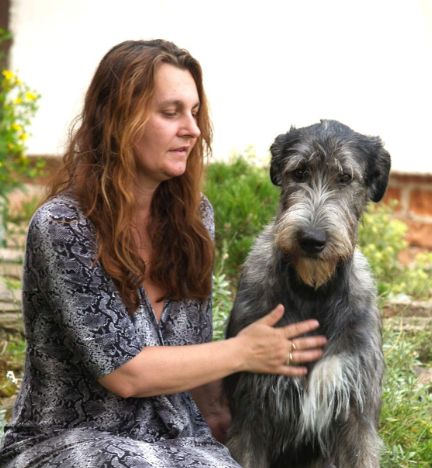 Why did you decide to become a judge and what do you enjoy the most when judging?
I was encouraged by my friends to become a judge. I enjoy being lost in the hounds when I am judging. I shut out the rest of the world and immerse myself in the hounds I am evaluating. I always seem to find something new and unique when I judge.

When was your first judging appointment?
I judged the Sweepstakes classes at the Irish Wolfhound Club of America National Specialty in 2008.

Was there a dog among those you have judged who gave you goosebumps?
I had two males at the Northstar Specialty who were breathtaking: My Best of Breed: Shellane Pavarotti Sings For Slaine and my Best of Winners: Lonnkyle Traveller.

Which of your own dogs do you consider the best? Would you share a picture with us?
What a very difficult question to answer. I will go with my recent big winner Multiple Best In Show Specialty Grand Champion - Lismore Stoneybrook Roxie Hart. I have several younger hounds that are not far behind her though. 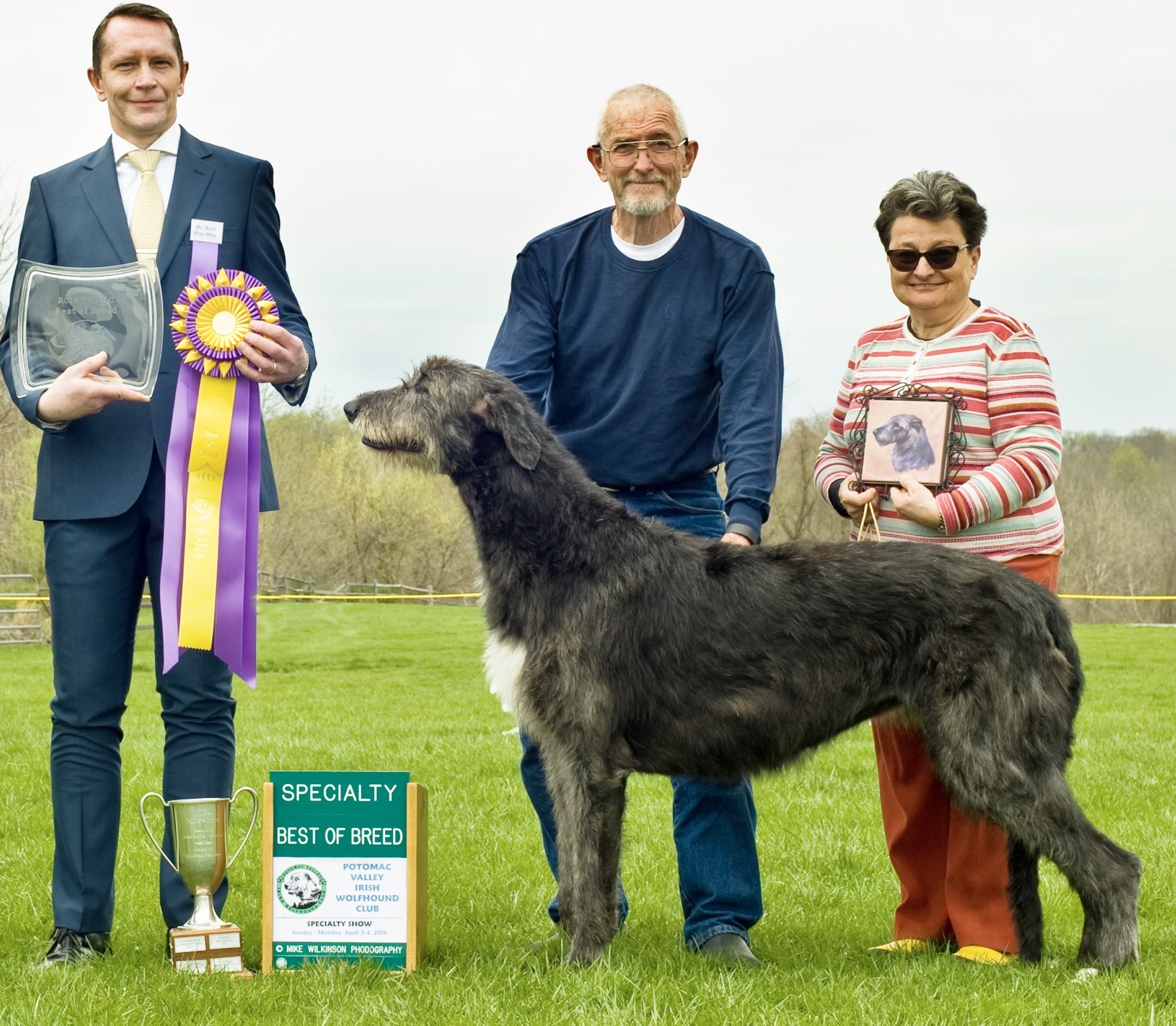 How long have you lived with Irish Wolfhounds?
My first Irish wolfhound was born in February 1981. From the first litter sired by Ch. Corniman Ella Mana Mou, she was bought as a pet, but was very influential in my entry into the dog show world.
My first show IW was Clonara Nellagh. Born in 1983 and litter sister to Ch’s Nizam and Niamh. Breed by Maggie and Stuart Wilkins, she is behind all my dogs up until present day.

Why did you decide to become a judge and what do you enjoy the most when judging?
I have said many times, judging good dogs is great fun.  The privilege of being able to get your hands on hounds, all over the world, that dedicated breeders have put their heart and soul into, is an honour not to be taken lightly. As a breeder, judging gives you the ability to assess dogs that may be part of a future breeding program.

When was your first judging appointment?
As in the English system, my first judging experience was at open shows. The first time I gave CC’s in Irish Wolfhounds, was at the prestigious Lady’s Kennel Club (LKA) in 1991.

Was there a dog among those you have judged who gave you goosebumps?
Dogs that I have seen, judged or handled that have left an impression on me, for many different reasons.  In Males: Carrokeel Coilte Merlin, Nutstown King, Drakesleat Kyak, Solstrand Kaspar, Lonnkyle Jester, Stoneybrook Konjur. In Females: Witchesbroom Wildrose, Mary of Nutstown, Seplecur Meg of Sulhamstead, Bokra Chance, Stoneybrook Medora.

Which of your own dogs do you consider the best? Would you share a picture with us?
I have been lucky enough to live with some wonderful hounds both of my own and in the Lonnkyle kennel. The best IW I have owned, was breed by the late Gordon Crane of Seplecur Kennel and came to me as a stud fee puppy. He’s name was Ch. Seplecur Trojan at Foinaven. Special for so many reasons, beauty, soundness, temperament and type. He also lived a long, healthy life, crossing the Atlantic with me, to a new home, at the age of 7 1/2., having just won his last CC at the Irish Wolfhound Club Show. Who could ask for more. 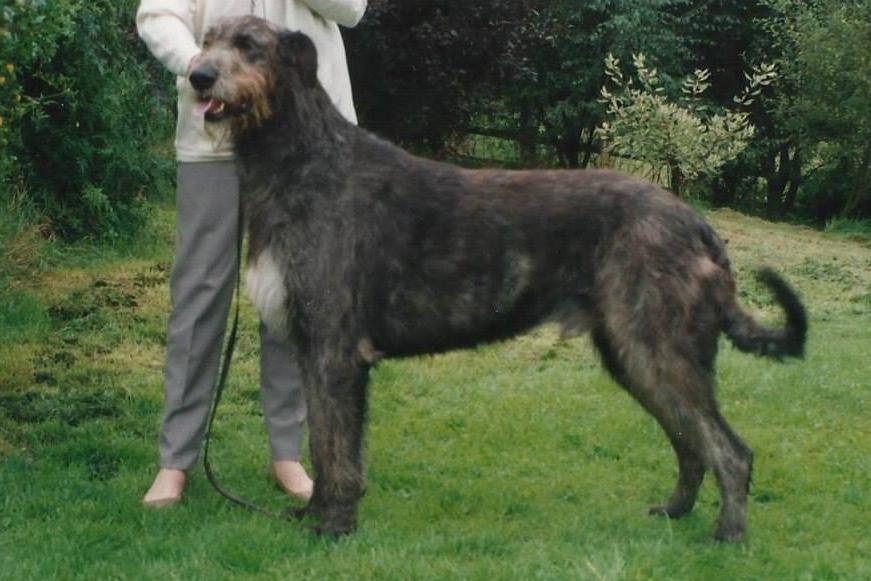 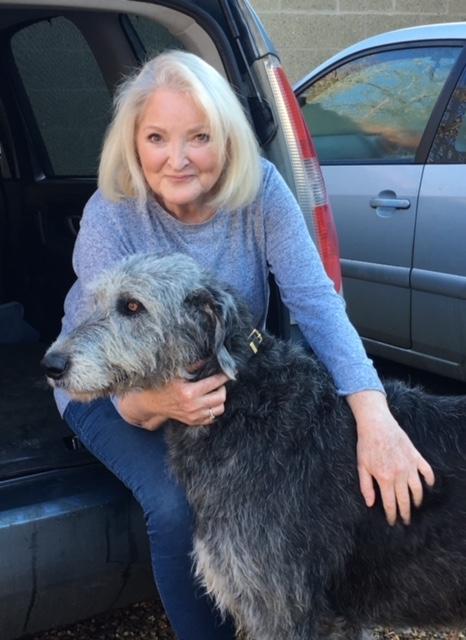